Storyteller and monologuist David Lee White details his struggle with love, sex and clinical depression at age 25 while living in a one hundred year old house in Pittsburgh’s hidden neighborhood, Panther Hollow. 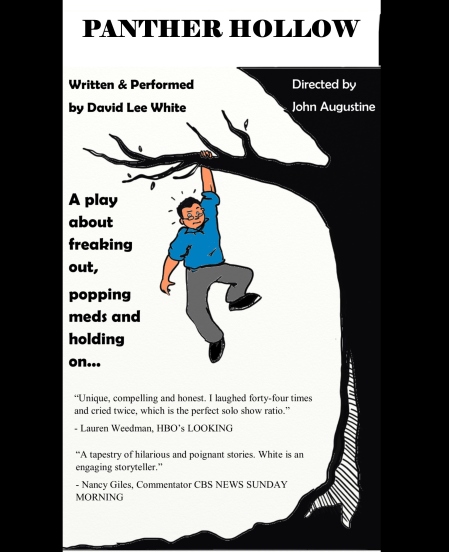 “What makes David show so unique, and his show so compelling, is his honesty. He’s such a good writer.  I laughed 44 times and cried twice.  The perfect solo show ratio. Corpses…dead bodies….depression…suicide – subjects that are tough to pull off but David does because his humor is so self–deprecating, and so honest.  Most importantly, for a solo performer, he’s a really likable guy.  Panther Hollow is a personal story of imperfect humanity perfectly told.” – Lauren Weedman, HBO’s “Looking,” “Hung,” and Comedy Central’s “The Daily Show.” Award winning solo performer and creator of the solo show “Bust.”

“David Lee White’s solo piece PANTHER HOLLOW USA tapestry of hilarious and poignant stories (among them a bout with depression, a group called “Teens For Christ,” and White stalking the author of Prozac Nation). White is an engaging storyteller, who’s expressive and a lot of fun to watch.” – Nancy Giles, Commentator, CBS News Sunday Morning

“David’s take on depression and suicide will have you laughing in the aisles and crying in your soul. Panther Hollow is a deeply personal work of bravery, joy and honesty. A truly inspirational tale that does what the best theatre can, showing that we are all human and even the deepest wounds can be healed. Better than CATS, better than ET.“ – Robert Carr, Director of Programs and Services, The New Jersey Theatre Alliance

As profound as it is funny, David Lee White’s PANTHER HOLLOW is an intimately personal tale that should be experienced by everybody. An account of the playwright/performer’s first salvos in his battle against clinical depression, the piece sheds light on a condition people still seem to think happens in a vacuum. PANTHER HOLLOW feels like an entry in your best friend’s diary that you weren’t supposed to read, but now that you have, you need to share it with another friend whose life literally depends on hearing it. The lessons it teaches are crucial for anyone who has experienced or knows someone who has undergone this struggle. It’s also entertaining as all get out! – Scott Sickles, Writers Guild Award winner and three-time Emmy Award nominee