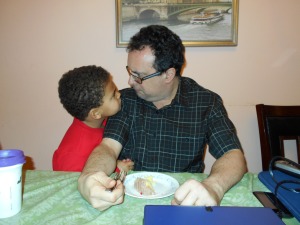 NICK: I saw a dead bird.

NICK: Over by the fence when we were walking Jessie. Dad?

NICK: And I saw a dead squirrel. How did they get dead?

ME: I don’t know. It’s pretty cold out. Maybe they froze.

NICK: When we go to the museum can we tell them because they might want them for their bones to turn into fossils.

ME: That’s not a bad idea. But it takes a looooooong time to make a fossil.

ME: I dunno. Thousands of years? Something like that.

NICK: Well maybe we could tell them and they could come later and dig them up and then have the fossils.

NICK: Did you ever see anything die?

ME: Yeah. You remember me telling you about my dog Baxter? I saw him die.

NICK: Where did he die?

ME: In our dining room.

NICK: How did he die?

ME: He got sick, remember?

NICK: Did you drop a pie on him?

ME: What are you talking about?

NICK: Who else saw Baxter die?

ME: Mommy, Grammy and Grumps.

NICK: What did you do with him after he died?

ME: Well…we took him to the vet and they…um…cremated his body. That means they burned it and turned it into ashes.

ME: Yeah. His body didn’t work anymore, you know? He was dead. So we kept his ashes.

NICK: Where are they?

ME: They’re in the closet.

NICK: THE ASHES ARE IN THE HOUSE???

NICK: Can I see them?

NICK: Why you burn him up?

ME: I guess I just didn’t like the thought of burying him.

NICK: The dead bird I saw you know what?

NICK: It was all tored up by vultures.

NICK: Yeah. And what if the vulture comes to our house to get Jessie?

ME: Vultures only eat dead animals so it won’t get Jessie. But if a vulture does come to our house, I will drop a pie on him.

NICK: We better not tell anyone about Baxter’s ashes.

NICK: BECAUSE IF WE DO THE MUSEUM MIGHT COME OVER AND DIG UP OUR HOUSE!