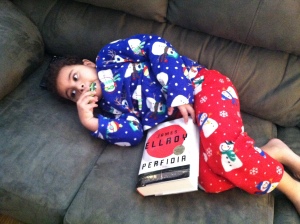 ME: We will. This won’t take long.

NICK: Why did we have to come back in the store?

ME: Because I found an onion in my pocket.

NICK: How the onion get in your pocket?

ME: I guess I put it there.

ME: Well… I didn’t mean to. I guess I picked it up and put it in my pocket and then we paid for all the groceries but I didn’t pay for the onion and I didn’t notice I had it until all the bags were in the trunk.

NICK: This line is so long!

ME: I know, bud, but I have to pay for this onion because you don’t just take things from the supermarket without paying. That’s stealing. And I want you to learn that.

ME: I know, bud, but I remember when my grandpa accidentally took a box of Jello and put it in his pocket and the next day he made me go with him to the store to pay for it and it left a big impression. So when I found the onion, I thought this would be a good chance to provide a…you know…good example for you.

NICK: Oh my Gosh what are you talking so much about?

ME: No, actually I just…here’s what happened…I got outside and noticed that I hadn’t paid for this onion. I put it in my pocket.

CASHIER: So you came all the way back in to pay for it?

NICK: Hi. Know what? My dad took an onion.

CASHIER: Well it’s a good thing he brought it back! That will be ninety-four cents.

NICK: Dad, are you a robber?

ME: Not really. It was an accident. But if I had just left without paying even though I knew I should have, then I would be a robber.

NICK: Do you know any robbers?

NICK: Tell me their names.

ME: Oh…uh…okay (I tell him their names)

NICK: What did they steal?

ME: Well, they stole…money…and things.

NICK: Did they go to jail?

ME: Yes. A couple of them went to jail for a very long time.

ME: Well…not exactly… they…you know…they hurt people. I don’t know if I should be telling you this.

NICK: With punching, with swords or with guns?

ME: With punching and with guns.

NICK: Dad! How did they punch if they had guns?

NICK: You can’t punch at the same time as you have guns in your hands!

ME: Right, right. Anyway, they hurt people and went to jail.

ME: One was in jail for many, many years and one will probably be there forever. Nick, I don’t know if I should –

NICK: But you’re not going to jail.

NICK: Because you paid for it.

NICK: Yeah. And it was just an onion.