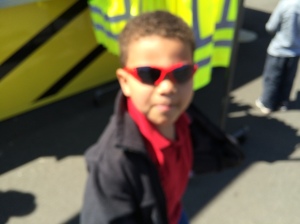 NICK: What happens if our house gets struck by lightning?

NICK: Will it catch on fire?

NICK: What if a person gets struck by lightning? Will they catch on fire?

ME: I guess they could.

NICK OH! OH! I KNOW WHAT TO DO IF YOU CATCH ON FIRE!

ME: Excellent. Do you understand what that means?

ME: Okay. Well, it means if you’re on fire, you should just stop where you are, drop to the ground, and roll around to put out the fire.

NICK: And then pour water on it.

NICK: But water puts out fire.

ME: I know… but… I guess it means don’t just wait around for someone to go get water. Start rolling around right away if you notice you’re on fire.

NICK: Then put water on the fire.

ME: Yes. Right. Unless there’s no water around.

ME: I don’t know. Like maybe you catch fire in an open field. Then you wouldn’t be around water.

NICK: I would have a bottle of water and I would pour it right on the fire.

ME: That’s good. But also, you could just roll around in the field to put out the fire.

NICK: And then the grass would catch on fire.

ME: That could happen, I guess.

NICK: If I catch on fire, I will be by a pool. Then I would just roll into the pool.

ME: That’s one option if you are definitely by a pool. But people aren’t always by pools when they catch fire.

NICK: Then they should drop, stop and roll and then I will shoot them with my water cannon.

ME: Okay, but what I’m saying is that there may not be a water cannon. And so the best thing you could do is just roll around and that might put out the fire.

NICK: I would still shoot everyone with a water cannon.

ME: That’s fine, but I’m saying there’s not always a fire cannon –

ME: I meant a water cannon.

ME: You know what I meant.

NICK: YOU CAN’T PUT OUT A FIRE WITH A FIRE CANNON!